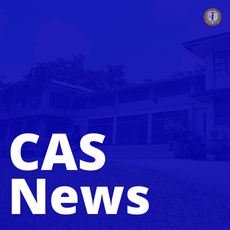 As part of its International Women’s Month celebration, The Philosophical Society of UPLB organized an educational and philosophical discussion titled “Breaking Stereotypes and Women Empowerment” last 14 March via Zoom. This event is part of their ongoing Omilia series that stimulates philosophizing through discourse on various intellectual and social pursuits.

Its first speaker, Asst. Prof. Eula Junina Blanco, emphasized women stereotypes and how to challenge them. The discussion invited insights about gender inequalities, specifically on how women are subsumed to certain standards and limitations.

“Gender stereotypes perpetuate inequality and discrimination. [Patriarchy] is worsened by these stereotypes as they shape one’s thoughts, attitudes, and behaviors,” Blanco clarified.

She also mentioned the importance of viewing women’s experiences as intersectional and how such are weaved with other sources of inequality such as racial, economic, cultural, and social biases. Blanco ended her talk by providing two crucial steps in overcoming gender stereotypes.

“The first is to criticize. This means questioning the status quo, challenging existing perceptions,and reevaluating our culture and practices. The second is to correct. Develop our values through desocialization and resocialization,” she asserted.

Meanwhile, Asst. Prof. Krissah Marga Taganas, the episode’s second speaker, underscored the difference between misogyny and sexism as the forefronts of patriarchy. She then stressed the gravity of their effects on women and how current disciplinary systems contribute to the worsening of gender inequalities.

“Women are constantly subject to systems of control and dominance, perpetuated by patriarchy… [W]e also must subject our beliefs and feminism itself in scrutiny,” Taganas posited.

The second part of her discussion shed light on what steps feminists could take to attain empowerment and women emancipation. She introduced concepts in feminist philosophy as a response to the masculinist and androcentric way of philosophizing.

Taganas added, “[F]or us to accommodate our concerns as feminists, we have to develop new methods of analysis and critique, define new lines of inquiry, and reinvigorate some of the central areas of philosophy.”

Since Omilia centers on the productive exchange of ideas, the organizers then opened the virtual floor to questions and ideas from participants. Asst. Profs. Blanco and Taganas responded to several inquiries about women stereotypes and gender equality.

“The first thing I always think about to enlighten people who are in denial is to hold dialogues with them. Also, at the macro level, we have to reform education so that systems will also be changed,” Blanco explained to a participant who raised a question on some people’s ignorance about the plights of women.

Taganas also delved into sexual harassment as one participant alluded to its nature and effects on victims. She asserted the importance of speaking up and shifting the accountability from the individuals to social institutions to genuinely accrue changes within the system.

This episode of the Omilia series convened hundreds of participants from Zoom and YouTube Live who hail from different parts of the Philippines. In Philosoc UPLB’s commitment to bringing philosophy closer to the masses, the organization seeks to hold other events which share the same goal of spreading enlightenment, excellence, and solidarity to people within and outside the University. 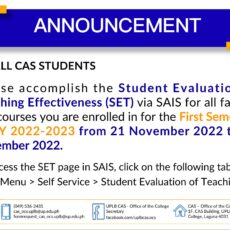 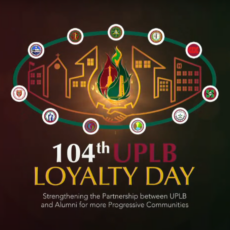 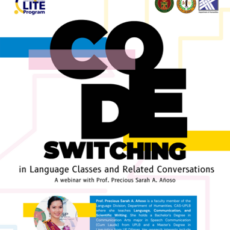